END_OF_DOCUMENT_TOKEN_TO_BE_REPLACED

With all the hoopla surrounding the release of the Sex and City film, a low murmer can be heard beneath the shrill excitement about dresses, cosmos and Mr.Big.  And it’s saying: “But Sarah Jessica Parker is so plain!” 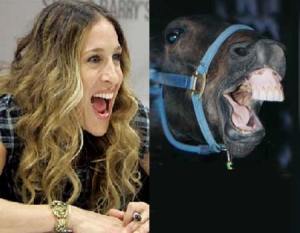 Yes, shock horror people, a lead actress has a few wrinkles and a big nose.  The arguable opinion that this makes her ugly is shown by the birth of this charming website (which gets credit for the above picture).  And when Maxim magazine published a list of the most ‘unsexy’ women in the world, guess who came up on top?  Poor Sarah Jessica.

But, really, what’s the big deal?  The woman has made millions through being Carrie, a woman who not only gets her man, but gets all the best shoes as well.  The fact that she’s someone who doesn’t fit into the plastic Hollywood mould should be celebrated.

But before you think the cynic in me has gone soft (no one sets up blogs to say nice things about people do they?) don’t think I’m defending her as a down to earth minion like you and me.  Afterall, the woman has abs I could smash a bottle on and a wardrobe to die for.  Bitch.