Being a woman who has frolicked on the internet for an undisclosed number of years now, I have seen many a case of what the cool kids call “sliding into your DMs”.

For those not down with the lingo, this has nothing to do with pulling on a comfy pair of Doc Martens – but roughly translates as “someone randomly direct messaging you in the hope of getting into more than just your inbox.”

Personally, I’ve had a lot of these across my social media accounts and I’m not deluded enough to think it’s because men see my twitter or Facebook page and decide I’m an alluring enchantress. I would put money on almost all women who spend a fair amount of time on social media having received an unsolicited private message from a complete stranger at some point. A lot of men too. And about half the messages received are probably not even from real people but so-called ‘bots’ created in cyber space and sent out in their droves to steal your identity, money, or soul.

Here’s a selection of  DMs I’ve actually received over the past couple of years: 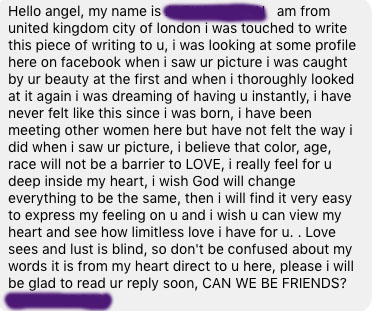 But not hard enough to write in coherent English, it seems. 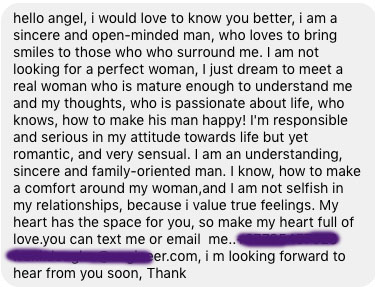 He’s so family-orientated. As in probably married.

The ‘At Least Put Some Effort in’

Come on, guys, I know I’m probably the 12th inbox you’ve slid into in the past minute, but maybe copy and paste something that’s a little less lazy?

I know, I know, not all men are creepy sliders and women do it too, as shown by the young lady above (who also falls into ‘At Least Put Some Effort In’ category – though props to her for trying a second time, I guess).

Eh? Is that a typo or does my unfamiliarity with ‘wamp’ mean I need to brush up on my Urban Dictionary?

Okay, I looked it up and am now pretty horrifically offended by the only definition that makes contextual sense.

Anyway. There is a reason why I’m writing about this right now. It’s because this week I received another DM from an unknown young man and … it didn’t actually make me gag, laugh or recoil in horror.

I felt genuinely flattered by the compliment and a little taken aback by the apologetic tone, not to mention the nice greeting at the end. It made me think… since the constant drip feed of sexual harassment scandals, are men becoming a bit more considerate in the way they approach women now?

The guy’s reaction to my short reply followed by non-response to his next message also surprised me in its refreshingly respectful tone.

There was another screengrab here – but the man, although anonymous, was upset I’d shared our conversation, which I can respect. But what he sent was nice, you know?

It brought to mind a tweet I’d recently seen by tech writer Holly Brockwell who shared her own non-invasive DM experience. 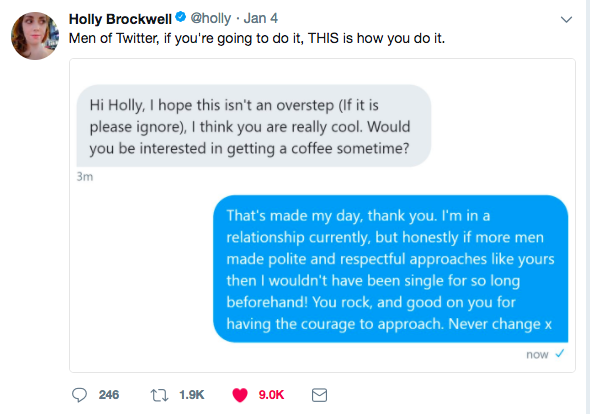 I mean, isn’t that just lovely? And such a polite and encouraging response from Holly too. Overall top exchange. 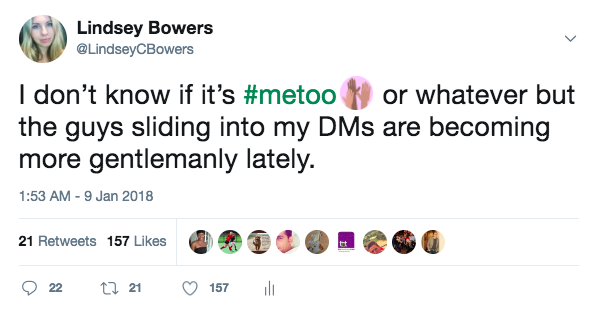 Which ended up being shared around a bit, due to a certain colleague of mine who has a few million followers retweeting it:

Which then led me to a whole new world of DMs as half the male population of twitter (and one woman) decided it would be really original and hilarious if they slid into my DMs – just like I mentioned in my tweet!

Haha, the internet is overrun with comedians!

In all honesty though, I’m not complaining, as most of them were meant in good spirit and a couple gave me a good chuckle. One of them was simply the GIF at the top of this page, which made me laugh out loud.

And yet it introduced me to a whole new world of DM types:

The ‘Slightly Menacing Husband To Be’

The ‘Why Are You Telling me About Your Fitness Plan?’

Unfortunately, whether it was meant with irony or not, I also got this, which I think we can just call The ‘Weinstein’

There’s always at least one that has to ruin the fun, whether it’s taking the joke too far or just plain being a pig.

At least I’ve now had some interesting discussions because of all of this. I think a few people took my tweet as an attack on all men in general – but it wasn’t.

But it’s certainly something for them – and all of us  – to think about.

If you see someone you like the look of online, by all means, give it a shot. The worst that can happen is they block or ignore you. Just please, be respectful, okay?

Who knows, you might end up getting the sort of response you were hoping for.