Call me Captain Obvious, but I really have only recently realised that being a girl is bloody hard work.

I’m not even referring to anything to do with periods, childbirth, body image or wage inequality. Na. Forget all the bleeding and hormones and cushiony bits of our bodies and the fact that we still live in a world where a female CEO gives us an involuntary jab of the warm and fuzzies because one of our kind has been ‘given a chance’.

Actually, my issue with being a girl is trying to bloody look like one.

Don’t get me wrong, I am quite clearly female to the average beholder. I have a shapely figure with sticky out things on the chest and long hair trailing down my back. Unlike Lady Gaga, it wouldn’t take me having a drunken piss in front of an award-winning national newspaper journalist to prove that I do, in fact have a vagina.

It’s just that… the whole having to get dressed and look presentable thing is an issue for me at times.

I have, at some point, been baffled by every type of fashion and beauty factor that a woman can possibly face. Hemlines, heels, fake tan, jewellery, piercings, makeup, nail varnish, hair cuts, hosiery, you name it, I’ve cocked it up. And even now, as I reach the December of my 20s… I still don’t really have a clue. My nails still chip within two minutes of painting them and my hair is perpetually stuck to my lipgloss.

Of course, we all experiment and some are lucky enough to find their own style and look great with it. My problem is I am all too easily influenced. I see literally every woman I so much as glance at on the tube as style inspiration. You think I’m exaggerating? Yesterday I saw a middle-aged woman with short, spiky, bright purple hair and my thought process went from: “I wonder if I could pull off that purple?” to “I’M TOTALLY DYING MY HAIR PURPLE”.

I did actually dye my hair purple once, when I was at least ten years younger and a lot more stupid. I thought it would look raw and punky. It looked like I’d dipped my head in Tinky-Winky’s toilet.

Yes, I’m always tempted to try “something different” but luckily such extreme decisions are now usually batted away by good old reason… though a mere four months ago, I made a spontaneous decision that ended with regret in the form of a large lump of red on the back of my (usually blonde) head, a trip to every hairdresser within a mile’s radius and my bank account a hundred quid lighter. Fail.

My first real efforts of trying to be a girl were when I got my first office job and I noticed other girls wearing high heels, feminine skirts and nice makeup. I suddenly felt a bit tomboyish in my comfy shoes and grey trousers and decided to start making more of a conscious effort. The most memorable style mistake from around that time was spraying fake tan over my legs, only to later realise that it had drifted over the top of my feet, leaving me looking like a polar bear that had dipped its feet in a pool of molten wotsits.

Then I moved to London and got a job in television where pretty much everyone looks great (the women and gay men do, anyway). I have colleagues who could and have modelled. Who swan in in break-neck shoes and seemingly salon-perfect hair even when they have to get up at 4am. It’s just effortless for them.

So this is when I decided I should “experiment” with fashion more. In fact what better inspiration than a fashion department sale, like the one that recently took place at my work? Perfect, no? I came away with beautiful shoes that I’m too scared to wear because they will result in certain breakage of neck, skinny jeans so skinny I would have to forgo food for three days in the lead up to sewing them on and a huge ring – which I really actually quite liked until my Grandma saw it and asked if I was going to read her fortune.

And it’s not only Grandma doing the burning. My boyfriend (whom, by the way, is prettier and more fashionable than me) actually sat me down the other day to “have a talk”. I was relieved to find it wasn’t a stern telling-off about my cake habit but actually the admission that he no longer wants to assist me on shopping trips any more because: “It’s painful watching you stare at terrible shit for ten minutes at a time that I know you won’t end up buying because it looks awful on you”. And he’s absolutely right.

Whenever I decide to brave the changing rooms, I will try on between 10-15 garments and more often than not walk away empty-handed because it doesn’t suit my body shape, is too big or too small, the colour washes me out or the style just isn’t “me”. Ironic as I’m still trying to find a style. And what’s even more ironic is that most girls have boyfriends who hate shopping but my bloke’s brilliant at it. About 70% of my retail purchases over the past year have been from him casually strolling into a store, picking up something I would never look at in a million years, telling me to try it on and me loving it. The boy owns more pairs of shoes and coats than me and can work every pair. I have a pretty bulging wardrobe as well but will stick to the same four or five outfits in a cycle of boring.

Though, actually, I do have a particular top that I now regard my “lucky, celebrity-hunting stripy top”. Because whenever I wear it, I end up being pictured with someone way cooler than me. But in truth, I fling it on a lot because it’s fairly “safe”.

Regard: (and this is a bit of an occasion – I’ve had this blog for about five years and have never once posted a picture of myself… but as I think the only people who read it are my Facebook and Twitter friends who have nothing better to do, it’s hardly a big reveal)…

Russell Brand with stripy top of glory (STOG). The other girl is Amy May, one of said fabulous-looking colleagues who could work a bin liner. Just look at her! She wears gold sparkly stuff to work!

Brian May with STOG (and Amy May wearing leggings that would make me look like a pantomime villain but make her look fabulous). Although I’m really ramping it up in this one by throwing on a necklace that cost me a fiver.

STOG and limp scarf getting completely outshined by The Saturdays.

You get my drift. I like to keep it safe. But deep down I want to try jumpsuits, I want to work the military look, I want to do embellishment and layering and all those other fashion-y words I’ve learned over the years through reading Glamour magazine. Yet I don’t because it always ends in disaster.

At least I can take some comfort in a video has been sweeping the net lately. Poor old Tori Locklear gives a tutorial on how to achieve pretty ringlets with the aid of curling tongs. At first she seems knowledgable about her subject, clamping sections of her buttery-blonde locks to get the desired effect… right up until she burns a section of her hair clean off, leaving only a singed tuft. 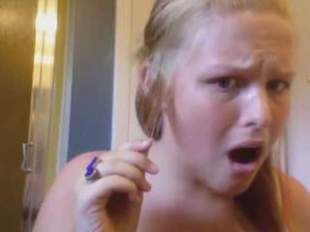 Oh Tori, I feel you girl.

You can see the disaster unfold here if you haven’t already.

The thing is, Tori is only 13, so can be excused, especially as she’s so adorable in her mistake. At the same age I attended non-school-uniform day in a Spice Girls T-shirt and Adidas tracksuit bottoms, convinced I was channelling Sporty Spice and that this was a good thing.

I don’t think I’ve learned all that much since.

One thought on “Being a girl is hard”