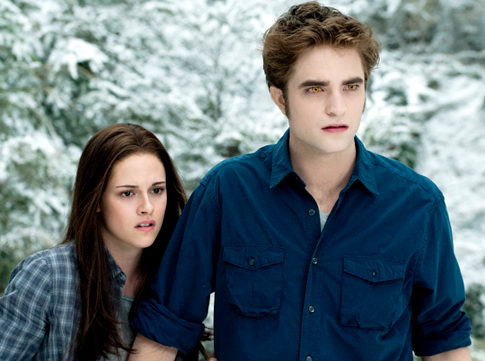 The Twilight franchise is like junk food for my head.  It’s like looking at a big, sugary donut and you crave it, so you eat it, but afterwards you feel a bit guilty and sick and think you really shouldn’t eat one again any time soon.  But then of course you do.

The films in particular are a total sugar-crash for my mind.  They seem like a really good idea at first, but by the time I’m halfway through I’m sort of waiting for it to end  and feeling sort of silly for getting so excited over scenes of saccharine teenage love in the first place.

But I went to see Eclipse last night with about 500 other loons who thought it was worth going to see in the middle of the night and actually really enjoyed it and think I probably could watch it again without asking myself “why!?” afterwards.

Some of the acting is still awful  and you realise why Jasper has one line between the first two films – Jackson Rathbone was clearly cast for his ability to smoulder and do that cute sort of cocky half smile rather than delivering actual believable dialogue.

And Kristen Stewart’s rather obvious wig distracted me from what was going on half the time (the film was shot when she had a black mullet to play Joan Jett in The Runaways).

But, it was altogether more enjoyable than the first two, with more action and character development. I actually felt something for Bella for the first time, ever, as she battles with the ever more likely possibility of never being able to see her mother again, nor growing up and having children.

I wasn’t  too sure about the decision to change the actress playing Victoria, but Bryce Dallas Howard gave a good performance as the vengeful redhead alongside the newly-cast bit of beefcake playing Riley.

Pasty-faced Robert Pattinson sadly loses his appeal in this one. His character mostly mopes and frowns and fawns after Bella as she struggles with her conflicting feelings towards Jacob (who, by the way, is even more unbelievably fit in this than in New Moon – I may even be reverted to the J-Team now)  and as my rather underwhelmed boyfriend put it: “Why are they both so bothered about her anyway?”

Indeed, I think that is a question most fans have asked since first reading the books.  Bella Swan has as much charisma as a Big Brother contestant who gets voted off in the first week for being boring. There is just nothing much to her.

Saying that, I still have a bit of a girl-crush on the impeccably sombre looking Kristen Stewart. Don’t ask, she’s just cool.

Let’s face it, a Twilight film never is going to win an Oscar or anything.  It’s not about that, it’s about fawning over the pretty people in it and having fun.